A superb new book. This book is a major work and deserves to be on the bookshelf of anyone interested in 20th century design. Deco Radio pays attention to detail in stories of design, manufacture and marketing of the radios and is enhanced by excellent photography and layout, all the work of the author. And what about the radios, all shown in glorious colour in the Radio Gallery section. What a treasure trove from around the globe, some accompanied by archival photos and advertisements. 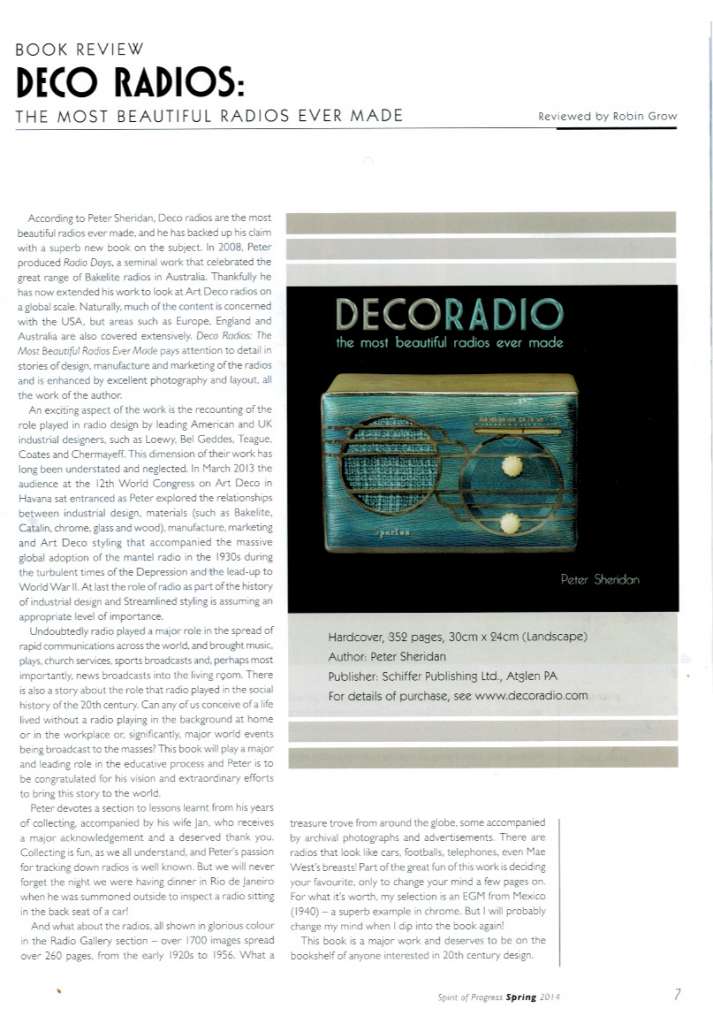 In his latest (book) as well as telling the stories behind their evolution, Sheridan has done a masterful job of capturing their simplicity and elegance in 380 pictures 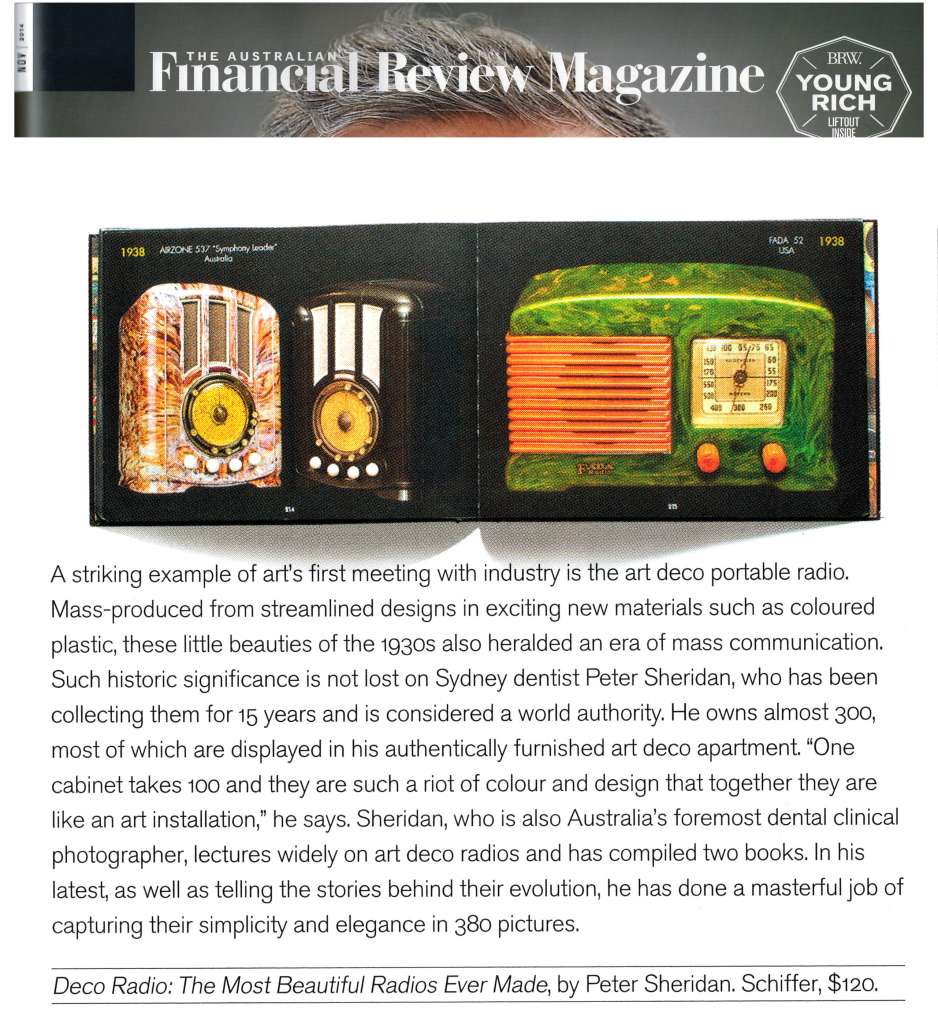 This is a serious contender for the best coffee-table book on radio ever printed. Not just aimed at the wireless enthusiast, Decoradio succeeds at attracting art-deco followers, people with an interest in beautiful objects and the early history of industrial design. Decoradio as it happens, is jam–packed with beautiful objects. The subtitle says it all: the most beautiful radios ever made. I recommend this book.

When Sydney dentist Peter Sheridan saw a brightly coloured 1930s radio in a jewelry shop in London he never dreamt it would lead to him being the world authority on Art Deco radios. More than 300 purchase later and his Sydney apartment now displays the best international collection of deco radios in the world. They also feature in a new book by Peter called Deco Radio – the most beautiful radios ever made

It was on a visit to London in the late 1990s that Sydney dentist Peter Sheridan spotted a bright green bakelite radio in a jewellery shop. “I thought it was the prettiest thing I’d ever seen,” he recalls. The radio was a 1937 American-made Emerson produced during the golden age of radio broadcasting – a time when radio provided cheap entertainment for families struggling in the depression years. Mr Sheridan was fascinated with the style and beauty of the radio’s design. The purchase of the Emerson was be the start of what would become arguably one of the world’s best collections of art deco radios. “From a design point of view they are spectacular,” he said. “In the 1930s everyone wanted a radio. The manufacturers are seeing a huge future and you’ve got these industrial designers in the United States – it’s a fledgling profession and these guys are 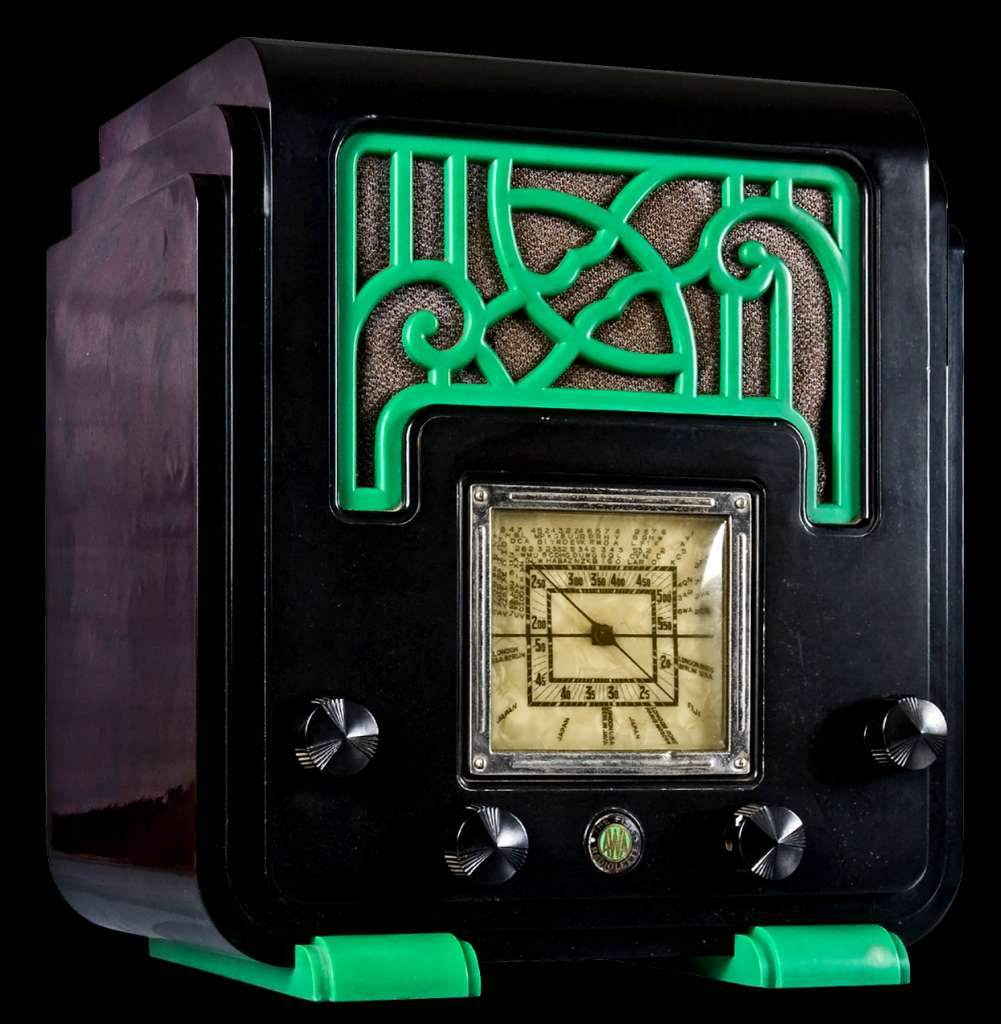 completely unknown. “They’ve all come from different fields – theatre design, architecture, set design, furniture design, and they’ve all started to try and sell themselves as industrial designers. But the only thing that’s selling in the early 1930s is radios.” The end result was a revolution in the design world as the coloured portable bakelite radios replaced the heavy wooden radio console. “The mantel radio changed the listener from the family to the individual,” he said.”The moment they started selling these coloured radios, specifically targeting women, you suddenly see the ability of the individual to choose their own programs.” Mr Sheridan now has more than 300 radios beautifully displayed in his apartment in Sydney.He hopes his radios will find a public home in the future and has knocked back offers from people like the Sheikh of Qatar to buy the collection. He has just published a photographic display of his radios in his book Deco Radio: The Most Beautiful Radios Ever Made in which he pays homage to the radios he describes as important icons in the history of art deco and industrial design. “The book reflects my appreciation of this revolution in design,” he said. With most of the available wall space in his apartment taken up with his beautiful radios it seems his collection may be complete. “It’s not the biggest [collection] but it’s the best,” he said.

A beautiful and informative book. Deco Radio reveals the fascinating story behind these beautiful radios and looks at the influence Art Deco and Industrial Design had on the evolution of radio styling in the 1930s and 1940s

Listen to The Golden Days Of Radio 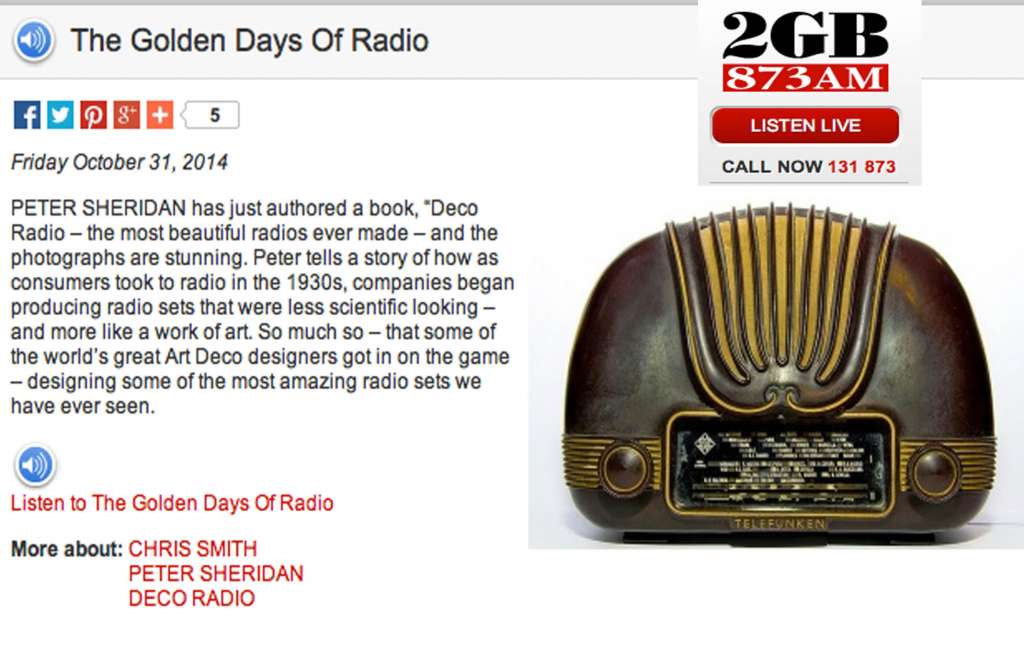 If you’ve a friend who has everything and you can never think of a gift then I may have a solution for you. It’s a book called Deco Radio –the most beautiful radios ever made.  An incredible photo gallery and a wonderful collectors item. What a book. Some of the most incredible photos and some wonderful history of this incredible medium. 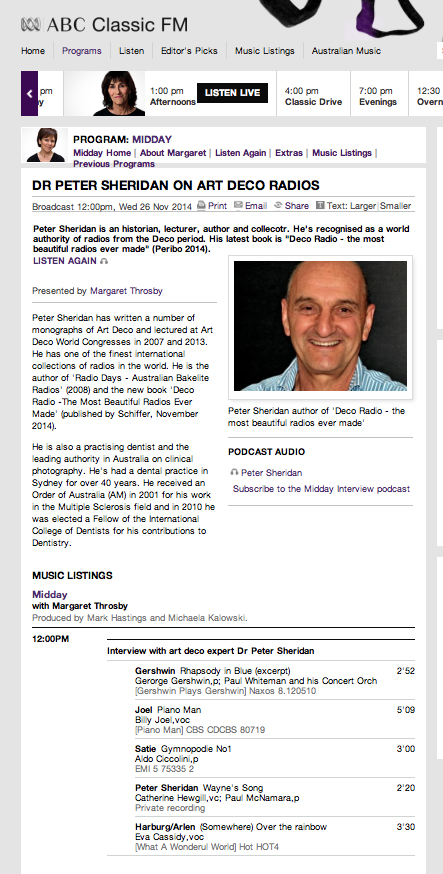 “Peter Sheridan’s new book is called Deco Radio – and it’s a beauty. These radios you’ve photographed for your book are exquisite, they are sensationally good looking. I was swept away by these radios. I work in the industry and I hadn’t seen anything like these radios until I opened your book. They are breathtakingly beautiful objects.”

The Most Beautiful Radios Ever Made (listen to the interview) 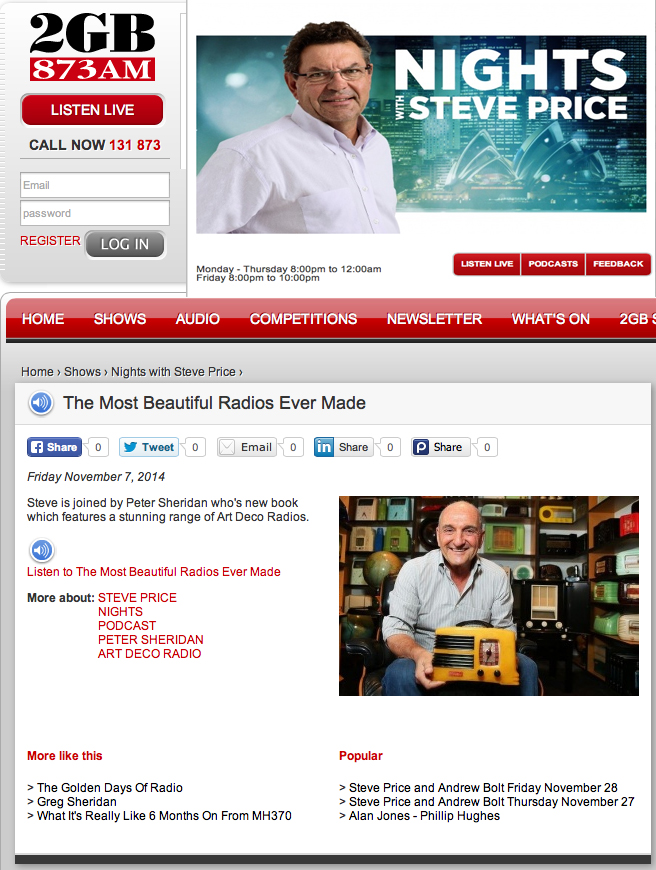 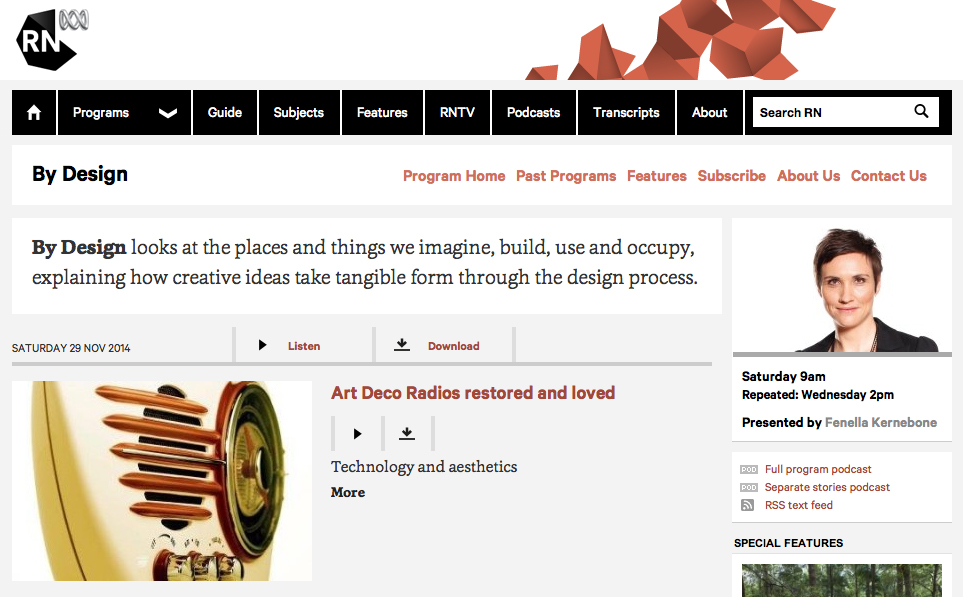 Peter Sheridan has recently released a comprehensive book devoted to documenting his collection of some of the rarest radios ever designed for the home and workplace, including the work of Industrial Design legends such as Raymond Loewy