Peter Sheridan is a respected historian, lecturer, author and collector. He has written a number of monographs on Art Deco and lectured at Art Deco World Congresses in 2007 and 2013.

His radio collection is one of the most comprehensive in the world and his highly acclaimed book ‘Radio Days – Australian Bakelite Radios’ (2008) is the standard reference for Australian radio collectors.

Peter is a member of the Australian Institute of Professional Photographers and his photographs are used by media, museums and specialist publications. Peter is the leading authority on clinical photography in Australia presenting post-graduate courses each year for the Australian Dental Association and Sydney University.

He is a guest lecturer at the College of Fine Arts in Sydney lecturing on Design History. In 2001 he was awarded a Member of the Order of Australia (AM) by the Australian Government for his work with people with Multiple Sclerosis and in 2010 elected a Fellow of the International College of Dentists for his contributions to Dentistry.

Collectors was shown each week on ABC Television from 2005-2011

What has been your favourite collection from the show so far?

I love the beautiful Art Deco radios of Peter Sheridan’s stunning reference collection. Peter is a ‘master collector’ a man driven by a serious passion for vintage plastic. He has a keen eye for displaying his items in the best way possible and an encyclopaedic knowledge of the topic; he has produced a beautiful book on his fine collection. 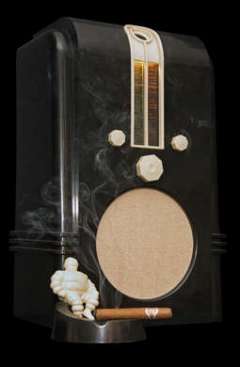